Where & How to Celebrate Día de los Muertos the Oaxaca Way 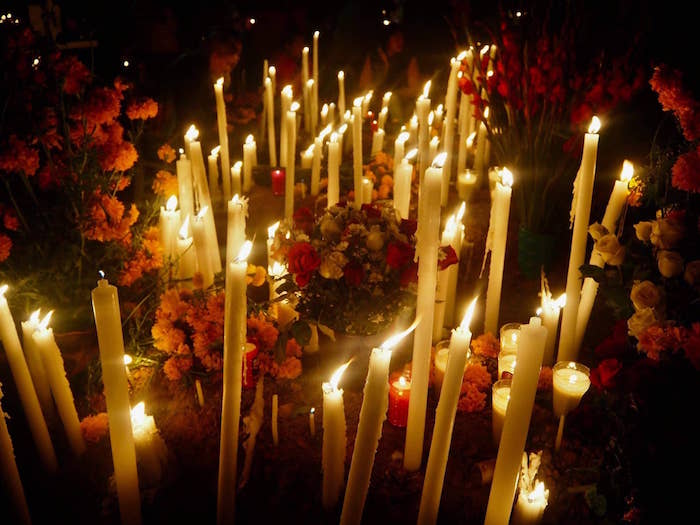 Visiting Oaxaca for Day of the Dead, or Día de los Muertos as it’s locally known, is a sensational experience. Though it’s a countrywide celebration, Oaxaca is the epicenter of Mexico’s Dia de los Muertos festivities. Save for Guelaguetza in July, Día de los Muertos in Oaxaca is also one of the most festive moments of the year, both in the city and in its surrounding pueblos.

Whether you celebrate Día de los Muertos in the pueblos of San Agustín Etla, Santa Maria Atzompa, Teotitlan del Valle, or Oaxaca City itself, what you’ll experience is nothing short of a joyous reunion and absolutely sensory-full celebration. You’ll witness the variety of ways the living guide their loved ones back from the land of the dead and how Mexicans view death, and therefore life.

In this post, we’ll introduce you to the who, what, and why of Día de los Muertos in Mexico and the rituals of Oaxaca’s best Día de los Muertos celebrations, giving you an idea of what it’s like to partake in this centuries-old life-after-death Mexican tradition here in the epicenter of the Dia de los Muertos fiesta.

What is Día de los Muertos?

Día de los Muertos is a joyful multi-day Mexican celebration of deceased loved ones that combines pre-hispanic death festivals with those of the Catholic tradition.

Though the specific manner of celebrating can vary from state to state, and even from pueblo to pueblo, the true purpose of the day remains the same everywhere: to come together with family and friends to feast, laugh, reminisce, and welcome back loved ones from the great beyond.

The core of the festivities usually takes place from midnight on October 31 when the gates of heaven are said to open through 3pm on November 2 when they close once again.

The first spirits to arrive for a festive 24-hour visit with their families are those of the children who have passed, los angelitos. They are welcomed and celebrated on November 1, All Saint’s Day in the Catholic calendar.

By 3pm that day, the angelitos bid farewell and the adult spirits follow the same marigold- and candle-scented path to their family’s awaiting altars (or ofrendas).

At 3pm on November 2nd, All Soul’s Day, the spirits are said to depart once more back to their realm until the next Día de los Muertos celebration.

The original seeds of what is today Día de los Muertos were planted several thousand years ago by the Aztec, Toltec, Zapotec, and other Nahua people.

By their beliefs, life could not exist without death, and the transition between the two was something to be celebrated, not mourned. Mictlantecuhtli in the Aztec tradition and Pitao Pezelao in the Zapotec tradition are the traditional gods of death and the underworld, the rulers of the Land of the Dead.

In fact, it was believed that when the living died, they embarked on a journey of nine challenging levels through the land these gods reigned. This journey could take years to complete, hence the Nahua death ritual of burying their loved ones with supplies, like food, water, and tools that might aid the deceased on their long journey ahead.

Today, Día de los Muertos is a blend of pre-hispanic and Catholic traditions. The very celebration coincides with the Catholic All Saint’s Day and All Soul’s Day, a coincidence that is believed to have some connection with the timing of the arrival of the Spanish during the Aztec’s annual “feasts of the dead.”

The two celebrations became one over time in Mexico, resulting in a mix of both, including the Nahua-inspired ritual of leaving food and supplies on the family altar and the medieval Spanish-inspired practice of using candles and flowers to illuminate the soul’s path home.

How & Where to Celebrate Dia de los Muertos in Oaxaca

Located in the nearby outskirts of Oaxaca, Santa Maria Atzompa is a town municipality well known for two things: its gorgeous green-glazed ceramics and its Día de los Muertos festivities.

Of what sets the Atzompa Muertos celebrations apart, it’s the stunning scenes to be found in the town cemetery. Every grave and tomb will be alight with candles, marigold flowers, and other decorative objects beginning on October 31.

On November 2, at the end of Dia de los Muertos, there is a very unique mask- and costume-filled comparsa, or festive parade, to the cemetery to usher the souls of their loved ones back to their resting place until next year.

Near to the beloved quesillo-making village of Reyes Etla, San Agustín Etla has earned its notoriety for its wild and all-night Muertos party on November 1st and 2nd.

Battle-ready musicians, mirror- and bell-laden costumed locals, and even men dressed as women gather in the streets for an eardrum-shattering display of which band and troupe can play their music louder.

Typically before this battle of the bands-style reunion on the morning of the 2nd, the costumed dancers and musicians gather in homes in their own neighborhoods to feast and imbibe on whatever their hosts are offering. Jokes and gossip about the local politicians are shared while song and dance pervades the night.

The muerteada, or the lively procession through the San Agustín streets, begins around 10pm November 1st with all groups converging at around 9:30am the next day for a wild and joyous display of song, dance, and all-out celebration.

Teotitlan del Valle is a Zapotec community famous for its extraordinary centuries-old weaving tradition. Due to the tight-knit fabric of Teotitlan, its Día de los Muertos festivities are especially unique, with both spirits and villagers doing their rounds at altars all over town.

Offerings range from panes de muerto, sugar-coated candies, hot chocolate, tamales, mole, toys, or practical tools like a tortilla press or a hoe for the farm.

On the afternoon of the 2nd, the cemeteries are teeming with families sending their departed loved ones off with mezcal toasts or scrubbing their gravestones with soap and water, while firecrackers and fireworks explode in the churchyard and homes all over town, signaling to the spirits that it’s time to return to the place from which they came.

In Oaxaca, you can feel the festive spirit in the air as soon as October begins. The marigold garlands find their place over doorways and on colonial-era balconies, while pan de muertos is added to bakery menus and market baskets all over town.

Due to Oaxaca’s celebrations catering more to tourists and the younger generations of oaxaqueños, the festivities take on more of a party atmosphere.

Parades of musicians and mojigangas (the towering puppet-like papier-mâché figures common in Mexican comparsas) meander through town, their music blaring, while men and women dressed in costume and with their faces painted as calaveras (skulls) flood the streets.

Fireworks and firecrackers join the cacophony, too, increasing in frequency as night falls. The more traditional celebrations occur inside local Oaxacan homes and at the city’s graveyards, where families gather around loved ones’ graves to decorate them with candles, flowers, and food as they celebrate and reminisce on the lives lived by their dearly departed.

Join Coyote Aventuras this Dia de los Muertos 2021 for a wild and intimate celebration of life and death in Atzompa, San Agustín Etla, and Teotitlan del Valle, where we have been graciously invited into the homes and traditions of several host families. There’s still space for you to join the party at each or just one.

To learn more or to sign up, send us a message or stop by our office in Centro anytime between now and October 30.